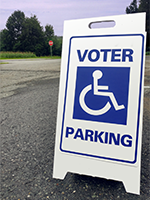 A nationwide study has concluded that more people with disabilities voted in 2018 than in either of the last two mid-term elections (2014 and 2010).

People with disabilities who did not vote in 2018 cited reasons that included a lack of transportation, schedule conflicts, and the disability itself. These barriers can be overcome with careful planning. Transportation should never stop you from getting to the polls and/or getting your early/absentee ballot and mailing it from home. So, contact your town clerk and register today, and don't forget to save the date! The 2020 Elections will take place on November 3, 2020.

Rutgers estimates that if there could be as many voters with disabilities as there are voters without disabilities, there would be an extra 2.35 million Americans casting ballots in the upcoming 2020 election.

For more information read the article by Time.