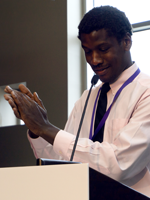 Developmental Disabilities Council members and staff from across the nation came together in early July to celebrate diversity, learn from each other, and honor outstanding individuals who have dedicated their lives to advocating for the rights of people with disabilities.

Sponsored by the National Association of Developmental Disabilities Councils (NACDD), the New Orleans event put Vermont front and center as Max Barrows, Outreach Director for Green Mountain Self-Advocates became the sixth recipient of the prestigious Champions of Equal Opportunity Self-Advocacy Award. The award recognizes those who embrace the values of the federal DD Act: inclusion, independence, productivity, and self-determination.

"I take pride as a black person with autism and use it to speak up for myself and others. People see what we have to offer within each other and they believe in us." - Max Barrows, Champion of Equal Opportunity

As a display of Barrows' unique ability to bring people together, he also hosted an early morning roundtable where self-advocates and allies came to talk about the status of the self-advocacy movement in their home state or territory. Under the federal DD Act, Councils must support self-advocacy.