DEPT. OF EDUCATION WILL NOT DROP FUNDING FOR SPECIAL OLYMPICS 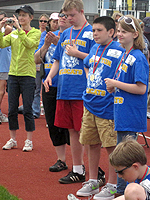 Self-advocates and allies rumbled by suggested language in the United States Department of Education's budget that seeks to eliminate federal funding for the Special Olympics.

Departments within the federal government are working hard to build budgets for the upcoming fiscal year. Once drafts are completed, they're reviewed by Senate and House Committees on Appropriations. Amidst this process, the proposed Fiscal Year 2020 budget for the Department of Education (DOE) has raised quite a stir.

In what Betsy Devous described as a "heavy decision," the DOE listed Special Olympics as one of 29 programs slated for elimination. Collectively, these cuts would be to save $6.7 billion dollars a year starting 2020.

Congress and the public expressed dismay that the Administration would zero out support for the popular sports program founded in the 60’s by Eunice Kennedy Shriver.

In an abrupt reversal, President Donald Trump announced Thursday, March 28, 2019 that the federal government will not stop funding Special Olympics.

Many other programs that aid students in low-income households and students with disabilities are at risk. Some programs were not given an increase against inflation, while others may see funding reduced or end entirely.

Programs that may be cut include ...

... and programs that may be terminated...

For more information about the Special Olympics termination read the article by TIME.