ENDING THE CENSUS EARLY MAY REDUCE FUNDING FOR MANY PUBLIC SERVICES 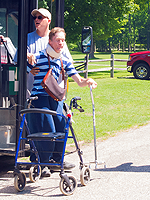 States could see a drastic change in financial assistance from the Federal Government if the 2020 Census concludes before everyone has the chance to respond.

If you haven't filled out the United States census for your household yet, you may want to do it right away. The United States Census Bureau is walking back their late October extension and changing the deadline to September 30th.

The census is important because it gives the Federal Government a good idea of how many people live in each state. As population grows, a state receives more Federal aid for public services such as education, housing, food, and Medicaid. The census also determines how many elected officials represent a town, county, or state.

With only about 80% of American households counted, disability advocates are concerned that the Federal Government will end the census before they have an accurate count. The pandemic has made it especially difficult for low income households and individuals with disabilities to respond to the census.

Every person must be counted. VTDDC strongly encourages all Vermonters to ask someone in their home complete the census before September ends. There are three (3) ways to respond:

For more information read the article in Disability Scoop.

According to the results from the 2010 Census, there were 625,741 people living in Vermont.