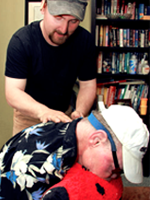 Seven (7) of ten (10) home health agencies in Vermont may see a significant funding cut from the Centers for Medicare and Medicaid Services as eligibility phases out for supplemental payments to providers serving rural areas.

The so called "rural ad-on" was signed into the Affordable Care Act by the Obama Administration back in 2010. The addition was intended to widen the funding stream to small and vulnerable populations and pay home health staff fair wages for the valuable contributions they make in preventative care. But eligibility rules for these additional payments are changing, with an anticipated loss of $1.2 million annually for Vermont.

"...home health agencies -- bring together families and individuals with their medical providers in ways that none of us could do on our own." - Representative David Yacovone

Representative David Yacovone (Democrat, Lamoille-Washington) is no stranger to health policy. He once served as the Commissioner to the Department for Aging and Independent Living, and he now sits on the House Committee for Appropriations.

Yacovone notes that home health agencies have already experienced drastic cuts as Medicare rates have gradually dropped 14% since 2009. Yearly increases to the home health budget need to become standard, he says, instead of when the legislature has "extra money".

The proposed rules could take effect as soon as the start of 2019, and phase out the rural ad-on completely by 2022.

For more information read the article by Vermont Public Radio.