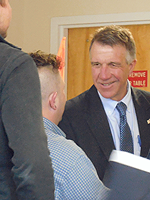 Vermonters with disabilities were reminded of the $70 million dollar gap in the State's budget as Governor Phil Scott briefly mentioned year-after-year cuts to agencies, departments, programs, and services.

Scott outlined a need for preventing crises, practicing fiscal discipline, and continuing to protect the most vulnerable, but he gave no direct increases to the Agency of Human Services or designated agencies. He also said that Vermont is facing a demographic crises, and without proper intervention, only Burlington has a chance of growing.

The Developmental Services budget received $7.7 million to support individuals who are entering the system, sometimes called “new caseload dollars.” However, there was no cost of living increase for existing service budgets, which effectively reduces services when adjusted for inflation.

Vermonters with disabilities and their family members may look forward to several budget increases in programs that they indirectly benefit from:

For more information read the word-for-word write up by VTDigger or watch the recording by ORCA Media.