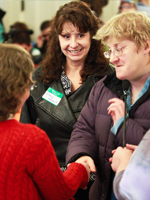 The Senate Appropriations Committee would like to have H. 542 (also known as "the big bill") increase funding to services that help low-income and vulnerable Vermonters.

The Vermont budget that will operate all government departments and services next year has a few unexpected, but not unwelcome, changes in the works.

Earlier this year the big bill passed the House and now sits in the Senate where it waits for its final reading. The Executive Director of the Vermont Developmental Disabilities Council, Kirsten Murphy, recollects that over the last decade social services have not been keeping pace with inflation. The Council partnered with a number of agencies in 2018 to educate legislators about Vermont's safety net and awarding designated agency staff a livable wage.

"In 2018, the Legislature promised the Designate Agency System a two-step increase in wages. We saw the first increase, but for workers supporting people with disabilities, that crucial second bump has not yet happened."
- Kirsten Murphy, Executive Director of VTDDC

The Senate Appropriations Committee agreed to the following adjustments:

The Senate Appropriations Committee made a small reduction to the Woodside Juvenile Rehabilitation Center, saying the state should rely less on the thirty (30) bed facility in coming years. They've appropriated one-time funding to the Department of Children and Families to help with that transition.

This week Legislators are meeting in a conference committee to work out the differences between the House and Senate versions of the fiscal year 2020 budget. They hope to have a final bill approved in time to adjourn on May 17, 2019

For more information read the article by VTDigger.